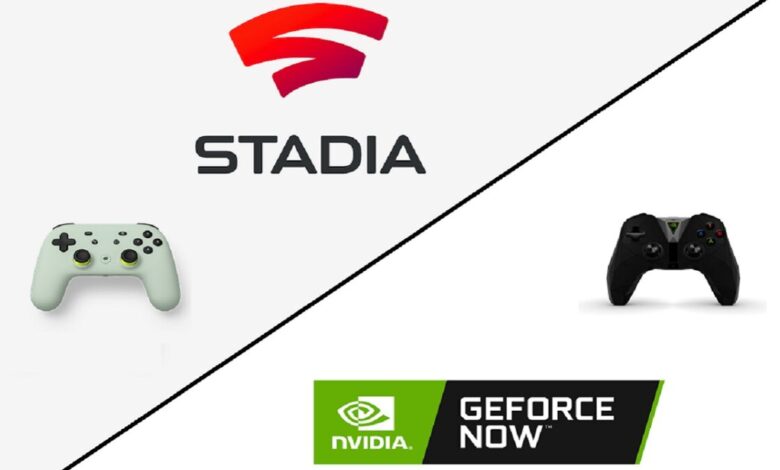 Chris Bicourt says: “It’s going to be a hard pill for the Nvidia Geforce Now fanboys to swallow, but the Google fanboys still have a few cards up their sleeve.”

I’ve been using Google’s streaming gaming platform Stadia since day 1 of it’s public release. I’m a Pro & Founder member. But over the last year I got more and more frustrated that I wasn’t seeing true native-4k games (instead, we were getting between 1080P-1440P upscaled) and a lot of advanced graphics features (like RTX, some fancy occlusion and volumetric effects) were not being included when PC users were getting them. Plus, the constant capping of 4K at 30fps was…well…I was getting angry!

That’s when Nvidia Geforce Now appeared, and on the horizon, the Premium RTX3080 tier. The promise of playing 4k games at 60fps exactly like they appeared on PC, was irresistable. And now, here I am. And it’s true – Geforce Now totally kicks Stadia’s butt when it comes to graphics quality and frame rate.

However, there are two areas where Nvidia’s offering struggles to compete with Google’s. And it’s a big surprise. Are you ready? Here goes…

1. Stadia’s controller connects (via WiFi) direct to Google servers, all other platforms go via the device

So to be clear, I play GeForce Now on the Nvidia Shield device, plugged directly into my 4K HDR TV. For testing purposes I have been regularly switching between an Xbox controller, a Playstation DualSense controller, and my Stadia controllers. I have a 500Mbps connection, my latency via Nvidia’s EU Central servers is between 20-30ms. I get a very good – no FANTASTIC – gaming experience at 4K. I notice the lag, but only because I’m used to playing FPS shooters. However, it is a little disconcerting. A quick flick and a millisecond later the movement…

it won’t bother everyone, and honestly, I still find it playable – Chris Bicourt

However, when I play Stadia, which I do on the same TV, via a Google Chromecast Ultra, the response time between me flicking the thumbstick or trigger on my controller and the result onscreen is significantly quicker than Geforce Now. I have no way of measuring it, but it is noticeable. So the big question is: why? Why are Google kicking Nvidia’s butt on this point, which you’d think is one of the most important for gamers (like me). Well, I did some research and discovered that Google has…

But, the real reason is that, when used wirelessly, the Stadia controller connects to Google’s servers over Wi-Fi instead of connecting to the device in front of you over Bluetooth. All (that’s all, bar none) of the other streaming platforms, from Geforce Now to Xcloud, require the wireless controllers to connect via your laptop or the device streaming the audio and video. There’s no competition. That’s always going to add a few ms, which can often be perceived in-game.

This one is a lot more controversial and it might be an issue my side. Comment if you have a different experience. But caveat: I’ve not noticed it if I’m playing at 4k. But if you’re playing at 1080P it can be devastatingly obvious. And where it’s obvious is in dark areas or areas of high detail. The grass and bushes at medium to long distance in the Witcher 3 are just a mess on Geforce Now. Now I know that for 4k Stadia uses the VP9 encoding system and Geforce Now H.264/5 … but we’re talking about 1080P. And actually, irrespective of codecs (because I don’t fully understand the nuances anyway) the visual difference is clear.

So, in short, even though Geforce Now is my platform of choice in many respects, and probably the one I’d go with if I had to drop one, I will miss Stadia’s response times!

No comments to show.